The Worst Hockey Injuries and How They Affect Players 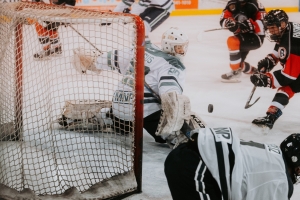 Hockey players of all ages and levels are prone to some level of injury. With the high energy of a contact sport, rubber pucks reaching speeds of over 100 miles per hour, and the risks of playing on the ice with sharp skates, there’s always some amount of risk.

Past professional hockey games and those for school-level games have seen their fair share of the worst hockey injuries compared to the more minor and common incidents. Here are some of the worst injuries that frequently happen during hockey games, as well as how they can affect players and their ability to play.

With the movement of players on the ice, getting a lower body injury in hockey is more common as muscles and tendons are more vulnerable to strains or pulled muscles. When this happens, the muscle or tendon (the soft tissue that connects the muscle to the bone) is stretched too far and causes a tear.

This is a common injury not just with hockey players but other athletes that tend to overexert their muscles. For hockey players that have to skate across the ice, hip flexor and groin strains are more common. This can cause debilitating pain in the area for players.

The best way to avoid these types of strains is to strengthen your muscles prior to your game. Proper warm-ups and stretches before your game can also prevent overexerting your muscles. How to treat a groin injury from hockey can depend on the severity of your condition: using protection, rest, ice, compression and elevation (PRICE) method can help with treatment, though more severe cases may need other forms of treatment.

There have been plenty of cases of concussions incurred on the ice. Back in 1968 – when hockey players didn’t wear helmets in games – Minnesota North Star player Bill Masterson fell on the ice and, after 30 hours, died from severe skull and brain injuries. This was one of the worst hockey injuries seen. Then, in 2011, Montreal Canadiens hockey player Max Pacioretty took a hit and collided with the stanchion at the end of the bench. He was motionless for several minutes before he was taken off the ice and was later found to have a neck fracture and a severe concussion.

Concussions involve a traumatic brain injury that causes the brain to move around your skull rapidly. This can have severe effects not only on your mental and cognitive skills but also on your motor skills and physical coordination. While hockey players today are required to wear heavy-duty helmets during a game, these don’t totally remove the risk of head injuries like concussions.

Given the complex nature of the brain, players who receive a concussion have to receive a comprehensive treatment plan for both neurological conditions and physical therapy.

When a player falls and takes direct trauma to their hips, they can develop hip pointers (bruising and chronic pain in the ridge area of their upper hip bone). It can take up to two weeks of treatment and avoiding strenuous activities to recover from their condition. However, if it takes longer, this suggests other hip injuries. One potential condition is trochanteric bursitis.

Hockey players can develop bursitis when their bursa, the fluid sac between your joints that reduces friction, becomes irritated and inflamed. This causes hip pain when your hip joints move. Left untreated, this can cause major pain in everyday activities, especially on the ice.

Treatment for hip bursitis can range from anti-inflammatory medication, physical therapy, and other remedies you can use at home. If all else fails, your doctor may recommend surgery to fix your bursa and prevent further inflammation.

How Many Hockey Injuries Happen Each Year and What Can I Do to Avoid Them?

Every year, the United States sees over 20,000 ice-hockey related injuries that end up in emergency rooms. The risk of some of the worst hockey injuries can apply to all levels of play, from the NHL, collegiate-level and high school level to recreational games.

Even outside of a game, there’s a risk of injury. According to a seven-year review of men’s and women’s ice hockey on a collegiate level, for every 1000 athletes, 19 men and 12 women were likely to sustain injuries during practice.

Taking steps like proper warm-ups and stretching, investing in high-quality protective gear, training your body, and avoiding collisions during a game can prevent injury. However, this doesn’t remove the risk, as accidents can still happen during a game.

Hockey players are at risk for a number of injuries that affect their hips, joints, skulls, and other parts of their body. Taking these precautions can reduce the risk of accidents and injuries. Still, it doesn’t completely protect players of all levels and ages from injuries that not only affect their ability to play but their body’s condition off the ice.

At American Hip Institute, we provide innovative hip treatments and other orthopedic solutions for musculoskeletal conditions. We are the nation’s leader in advanced hip treatment that can help athletes, recreational players, and anyone with an active lifestyle recover from their injuries.

Request an appointment today to receive a treatment plan customized to your own condition.